Winter gifts from Eldritch Black & not a lump of coal in sight!

It’s been a long time since I last posted to the Occasional Blog, which given its name, seems fitting. The eagle-eyed among you might have spotted the odd Instagram inspired post, like this one, but as for book news, there’s been nothing much since my last update.

My silence has mostly been down to the fact I’ve been busy writing not one, but two new works. The first, The Night of the Christmas Letter Getters is a short story about a dark winter’s evening, a dastardly plan, and elves and trolls and a secret Post Office.
Here’s the cover: 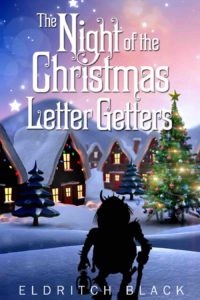 And here’s the blurb:

The Night of the Christmas Letter Getters is here…

It’s the most magical time of the year again. The snow is falling, the evenings are drawing in, the secret Post Office is open for business and the Christmas Letter Getters are out in force. Among them is Finley Stark, a small elf with big problems. He doesn’t know it yet, but there’s sinister forces at play.

Soon Finley finds himself being chased through the snowy Yuletide streets of a strange old city, pursued by trolls with dark, fiendish plans.
And candy in the oddest flavors…

The Night of the Christmas Letter Getters by Eldritch Black is a darkly whimsical tale of Elves, Trolls and festive frights.

As of the time of writing, The Night of the Christmas Letter Getters should be available everywhere. And you can get it for the price of nothing on iTunes, Kobo, and all other online booksy type places.
It’s live on Amazon too & I’ve asked them to make it free, but for now it’s a whole 99 cents. Hopefully this will be fixed soon.

So there you have it, a free early Christmas present from Eldritch Black. And because there’s a super moon coming, and it might be blue (if you squint), I’ll have another blog post tomorrow about my brand new novel Krampus and The Thief of Christmas which is coming this week…