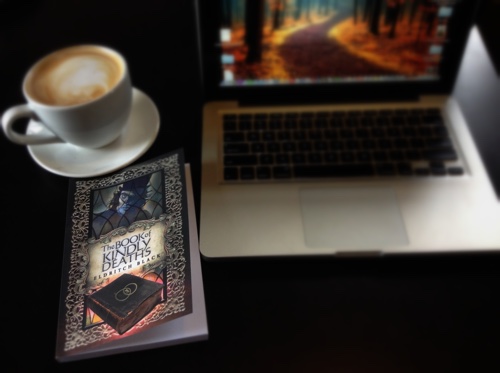 Even though The Book of Kindly Deaths has been available for a couple of months now, I still get an immense thrill from seeing it in real-life book shops.
Including Local Grown, the very place I wrote a great deal of the novel in. Local Grown’s a coffee shop situated on the island where I live. Yes, a writer writing a book in a coffee shop, who would have thought it?
The coffee shop is situated on a pier which overlooks a cove. There’s really nothing better than gazing through the window across the waters when stuck on the odd passage of writing. Beyond the glare of the screen is the calming ebb and flow of the water. At least on the surface, for who knows what tentacled horrors lurk below.
I try not to think about them too much, for fear any directed attention might summon them up from the water.

Strange things happen there from time to time. Perhaps it’s the collective imaginations of all us caffeinated writers at work. Warping reality.
On one occasion, it seemed very much as if a character from one of my new novels actually came into the shop to buy a coffee. Yes, it probably wasn’t actually him, and yet it was a very close facsimile and not a pleasant experience.
Because that character was as bad as bad can be.
But that’s a subject for another post.

For now, I thought I’d share a couple of pictures of the novel out in the wild, as well as a passage from the very beginning of The Book of Kindly Deaths. I hope you enjoy it.
And finally, I’m planning on updating ‘The Occasional Blog’ more often in 2015, as I have a number of exciting things planned.
More on that soon… 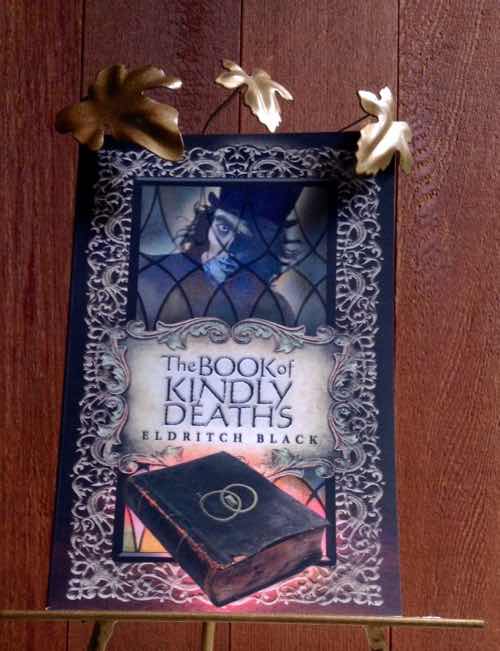 On a desk in the room with the stained glass window sat a book.
It was a thick volume with a worn and cracked black cover showing a gold symbol, a rectangle within two circles that sparkled and flickered as if teased by ghostly fingers. Voices whispered from inside the book, growing in volume, a few human, a few not. As their distant howls and cries grew, the book rocked with such force that it flew into the air and hovered.
When it thumped back onto the desk, the thick fountain pen next to it leapt into the air like a small brass salmon. As it clattered down upon the desk, a spark shot from the pen’s nib, playing over the book and sending its pages flying open.
One by one, the pages flipped, faster and faster, an animated blur of neat blue writing seeming to jump with the book as its dusty pages turned.
Beyond the room with the book and the stained glass window, the room that had no business being there, the dark, sprawling house was silent.
Like a cat, tensed and still and waiting for its prey to make a move.